Constance Calling Is
Preparation of the Bride and The Restoration of Israel
~ To glorify Elohim & encourage His bride ~
She is an Ordained Minister and Prophetic Psalmist
* She is available to speak on a variety of topics and can customize her ministry to the specific gathering.
* She leads prayer for Israel with a harp and bowl style.
* She sets up her artwork to display for ministry and/or selling her prophetic artwork.
* She does custom prophetic portraiture.  Call for a consultation to do a photo session and have Constance paint your prophetic portrait!
* She does workshops on "stirring up the creative gifts, and how God uses our pain to infuse our creativity, and other topics."

Constance has a powerful testimony that brings "HOPE" to those who are struggling with various trials.  Her message is "never give up your hope in the Lord, for He is faithful to bring freedom, healing and fulfilled dreams!"  She believes that through prophetic art and song, the Lord is healing people physically, mentally and emotionally, and He brings us into deeper revelation of who He is as well as imparting revelation of how the Lord sees us.  It is important for us to have understanding about our true identity as the bride of Christ.

She often combines her testimony with showing her artwork and releasing prophetic song.  Each image has a story behind it and is intricately woven together with her love for Jesus Christ, her love for her family and her love for Israel.  She and her husband have seen the Lord move mightily in their family of four children, as they have come through twenty years of dealing with tragedy on many levels.

Constance's art is displayed both nationally and internationally in America, Israel, Japan, China, Africa, and other nations. Public exhibitions and speaking engagements include Aglow International, Women of the Kingdom, Glory of Zion Ministries, multiple prayer houses, healing rooms, churches and ministries.  She is a native Texan.  She and her husband live on ten acres in Lone Oak, Texas.

MINISTRY
We support several ministries/and individuals in Israel financially; and prayer support.
​In April of 2017 Constance spoke at Tokyo Aglow in Japan.
She is a leader in the Women of the Kingdom Ministry that is based in Woodland Park, Colorado, and was ordained in 2018 as a Minister and Prophetic Psalmist by founder, Dr. MaryAnn Robertson.  (also founder of HighPlace Ministries, Colorado).
Constance is an End-Time Handmaiden, and she travels with her artwork and ministry. .

www.ReturnToJudah.net    www.returntojudah.nethttps://www.returntojudah.net
​Constance and her husband, Woodrow, founded Return To Judah Ministry, a 501c3 in December of 2019.  They led a group of worshippers into Israel in October 2018, The King of Glory Procession, releasing worship in the Negev Desert, Jerusalem, Shiloh, and The Galilee.
If you would like more information on this or would like to make a donation:
Email:  ConstanceWoods1212@yahoo.com
​My Creative Journey  ~
Like many of us, I did not truly discover creative fulfillment until I was in my forties.  In my early years I loved doing artwork and singing.  I would focus for hours on pen and ink drawings of animals and people.  I loved the detail work.  In my early teenage years my mother saw that I had a gift.  She arranged for me to take lessons in pastel portraiture.  I was by far the youngest in our class.  Within a year my work progressed and teachers were commissioning me to do their portrait.  That’s when I completely shut down the gift.  I quit.  In hindsight it is clear that I was insecure.  It’s not easy to distinguish whether I was afraid of failure, or afraid of success.  Either way, my fear of what people thought handicapped me for many years.

That’s when I became immersed in music.  I was in as many choirs and select ensembles as my schedule would allow.  I could sing with the others and remain anonymous.  It didn’t take my teachers long to discover that assigning me solos would cause me to shut down.  Singing became my passion, my place of fulfillment and safety.  After graduation it was a progression from classical choirs to the joyful discovery of worship choir in 1985 when my husband and I were born again.  I was given opportunities to do duets and solos.  It took many years but I pushed through the fear.  I was asked to be the Worship Leader for an Aglow International Ministry meeting in 1994.  In those first weeks my fears were overcome.  No more performance, the atmosphere was one of freedom as we gathered to worship the Lord and seek His presence.  My heart was set free from the fear of man.  I learned to offer my gifts to the Lord, my desire was (and is) that He would be pleased and glorified.  The fear of the Lord was being cultivated in my heart.  This was a defining moment in my life.

During these years I was taking a lot of photos of our four children.  Who can take a bad photo of such great subjects, right?  In the late 90’s I began taking graduation  photos for friends.  Having no training in photography, what people recognized was my creative eye.  There was a new beginning when I found a certain negative and printed an 8x10 of it.  After framing the photo of doves nesting in a cactus I wrote a note of encouragement to go with it as a wedding gift.  This began a season of giving photos with notes, or prophetic words and pictures.  Shortly afterwards, I was invited to be the event photographer for the Father Daughter Purity Ball in Colorado Springs for 3 years.  I am thankful for this amazing opportunity.

A few years later, on my second trip to Israel the Lord gave me a special opportunity.  While at the Western Wall, a beautiful Jewish bride came there to pray.  God prompted me to photograph her.  She smiled and nodded her approval.  As I took a few photos the Lord gave me a vision that included a subtle engraving in the wall beside the bride.  The words were “I am my beloveds and He is mine, His banner over me is love.”  At that time I was shooting with film, and I had not even heard of Photoshop.  Within a month after returning from Israel the Lord delivered into my hands a copy of Photoshop.  Within another few weeks, despite my very weak technical abilities, by the working of the Holy Spirit through me I created “Bride At The Wall.”  The Lord said, “This is fine art,”  so I began having it professionally printed on high quality  art paper and canvas.  The “foundation artwork” was birthed.  I was amazed that when it was displayed, many women would come up to it and start weeping.  They were deeply touched by the Lord through it.  This gave me a new understanding of what God was doing through my art.

A few years later came a significant experience.  I was very broken, in deep pain, and depressed.  After being raised up in a vibrant Christ centered home, one by one, each our 4 children had departed during their early teen years, struggling with addictions, criminal activity and all that comes with that lifestyle.  For 10 years I suffered the trauma of our family being torn apart and destruction everywhere.  In 2005 I was working on an image of a young woman in white, dancing in front of a cross, it took months to complete it.  Later I realized that the Lord covered me through a two-year season, teaching me to truly rest in Him.  I sensed “God broke open a deep reservoir of creativity” inside of me and from the place where I had experienced deep pain and suffering over years ~ came forth His beauty;  Revelation;  Intimacy with God;  Insight to facets of His Character;  Aspects of His Bride;  all pouring out of me.

“Surrender” was birthed, the finished artwork of the girl in white is my testimony of God healing my heart and restoring my joy during those 2 years. There are 9 Hebrew names of God in the background, and these are the specific names He revealed personally to me during that time.  This was also the first time that I had done painting to enhance my work.

I’d like to share some of what God has shown me about this style of art.  I take a lot of photos.  There are times when I sense God wants me to photograph something and I just flow with it.  Those images are what I draw from when I’m working.  For some works, the Lord will show me the person who is to be represented in the art.  When we begin a photo shoot, there is a lot of prayer and worship going on.  There is more authentic worship than posing.  This way, the Lord’s anointing on this person comes through in the photos.  That’s why it’s so important for me to only use photos of the people God specifies.  Just as Amos speaks of “layers in the sky,” each layer of my artwork adds to the finished anointing.  I don’t understand it all, but many people have told me that God’s anointing is on my art.  As people see the images, some have received inner healings; some receive greater levels of faith, and many people have received revelation and understand their identity as Sons of God and the Bride of Christ.  It’s not just my artwork that God is anointing and using for His kingdom purposes.  He is releasing creativity and raising up His artisans all over the world in this hour.

I’ve talked a lot about the photography aspect of what I do.  But, the digital painting has become a key part of my work.  Through the years I’ve experimented with various tools in Photoshop like the airbrush, the texture brush and others.  My images like Surrender, and Watchman, Lion of Judah, and War Horse were brought to life by older painting techniques.  This was not an easy way to accomplish the look I wanted.  Around 2008 I discovered Corel Painter and I found it to be amazing software.  You use a tablet that connects to your computer and a digital paintbrush.  With this program the paintbrush has sensitivity to the pressure and direction of stroke from your hand.  You can use oils, acrylics, watercolors or any number of other mediums that each have numerous variants.  This has opened up endless possibilities for me.  I do much more painting now and love this medium.  I have some health concerns that would make the chemicals of traditional painting a problem for me.  My plans now are to continue honing my skills in digital painting and go where the Lord leads me.  I have found the Christian artist community to be non-competitive and supportive of one another.  It’s my pleasure to encourage others and share what I’ve learned.  Many have helped me along the way. 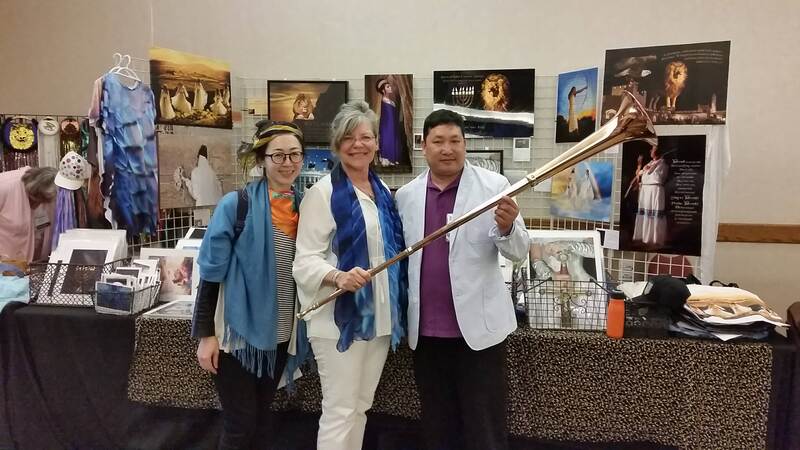 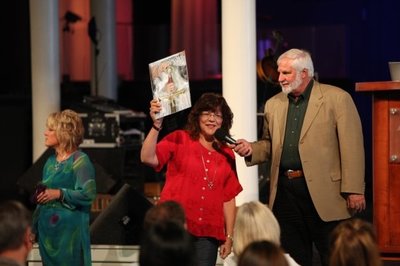 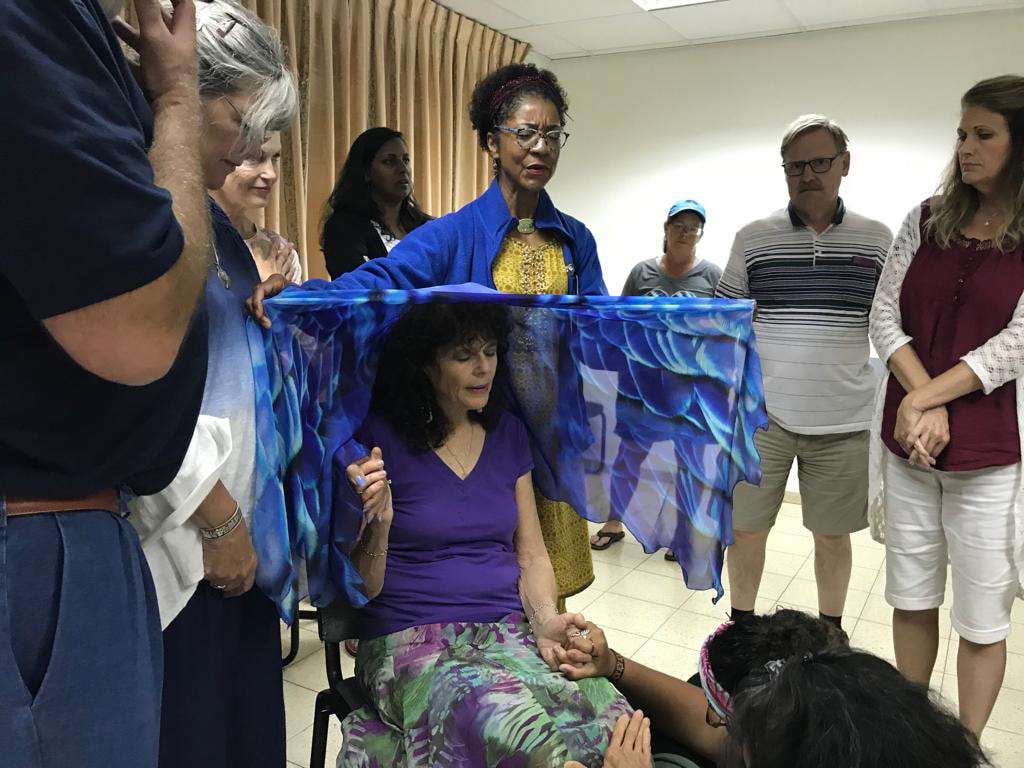 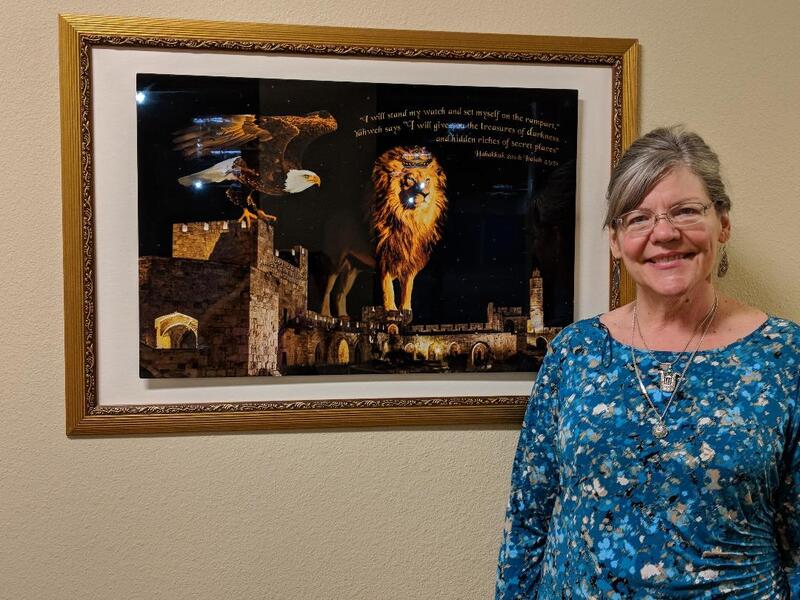 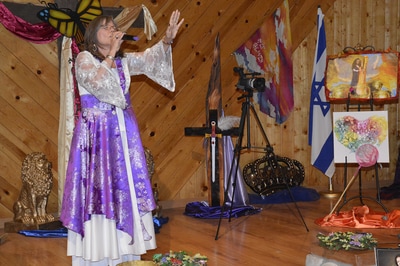 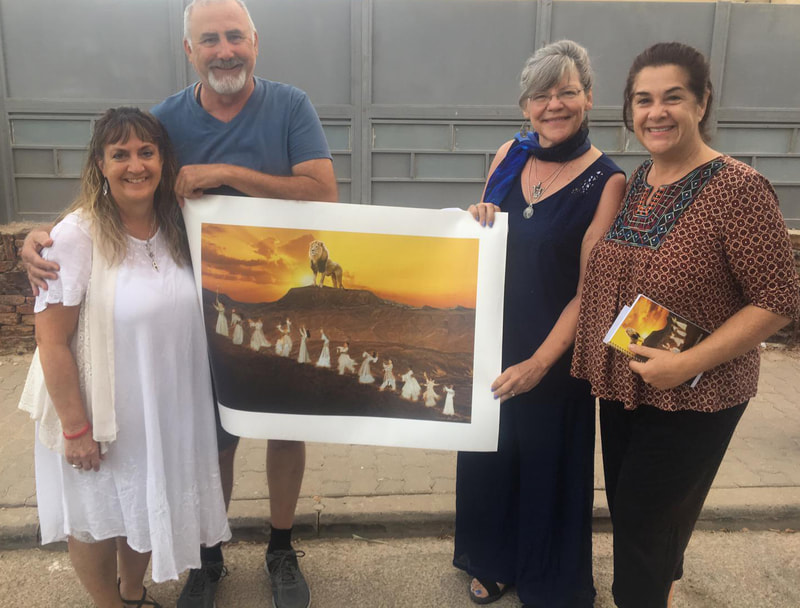 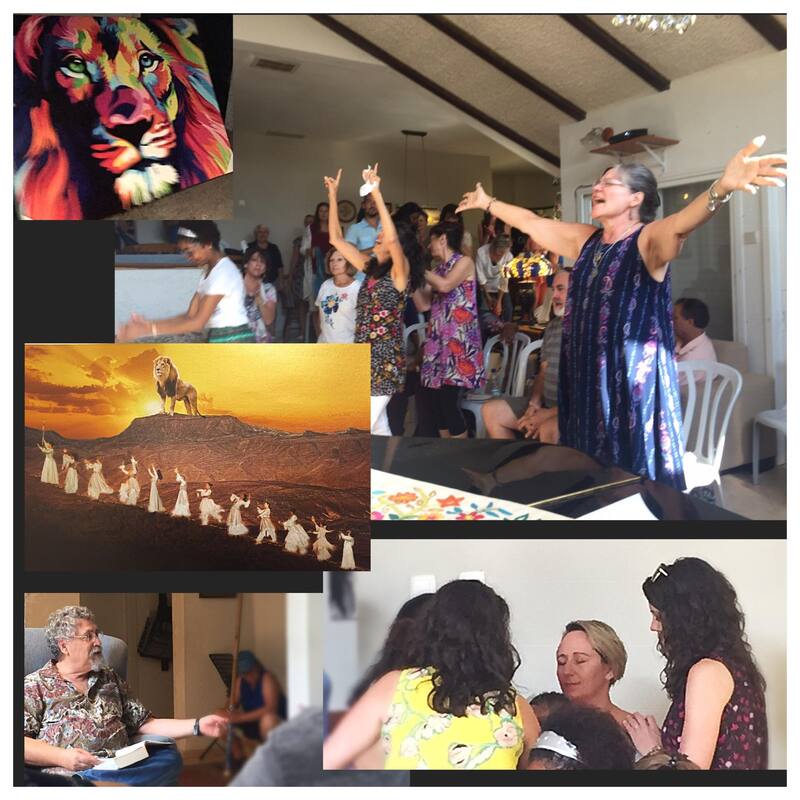 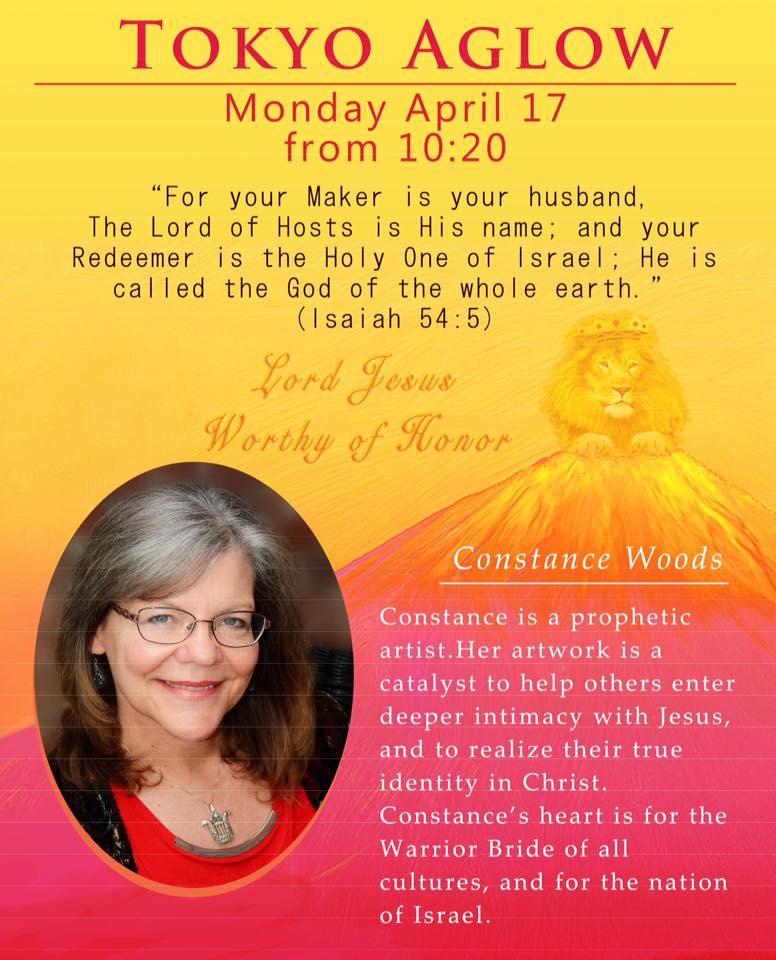 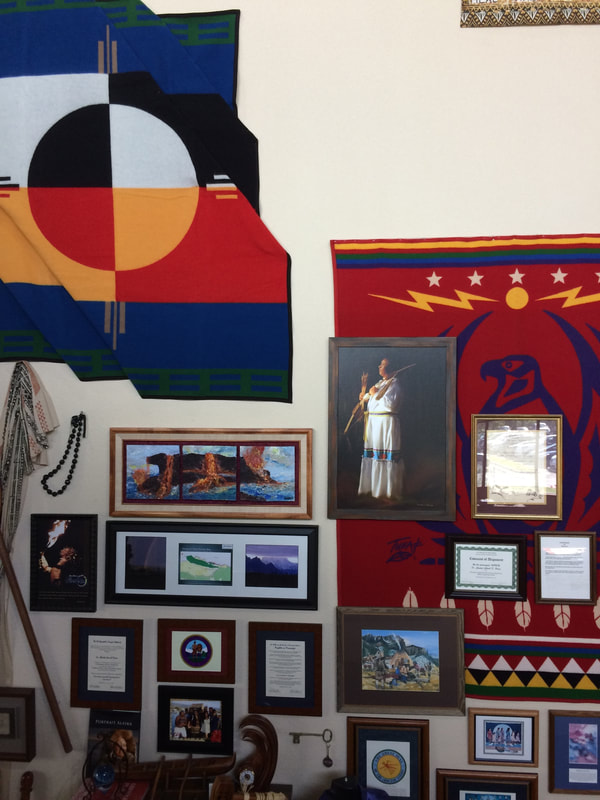 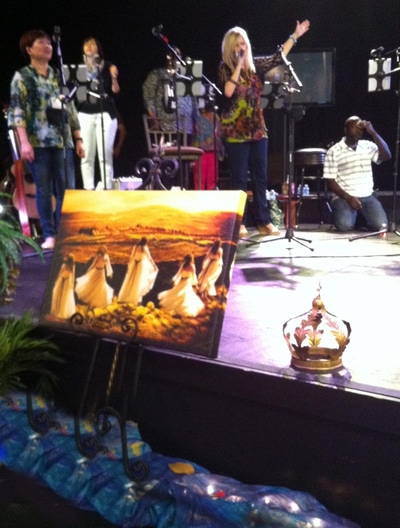 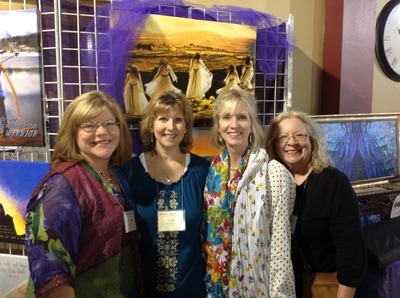 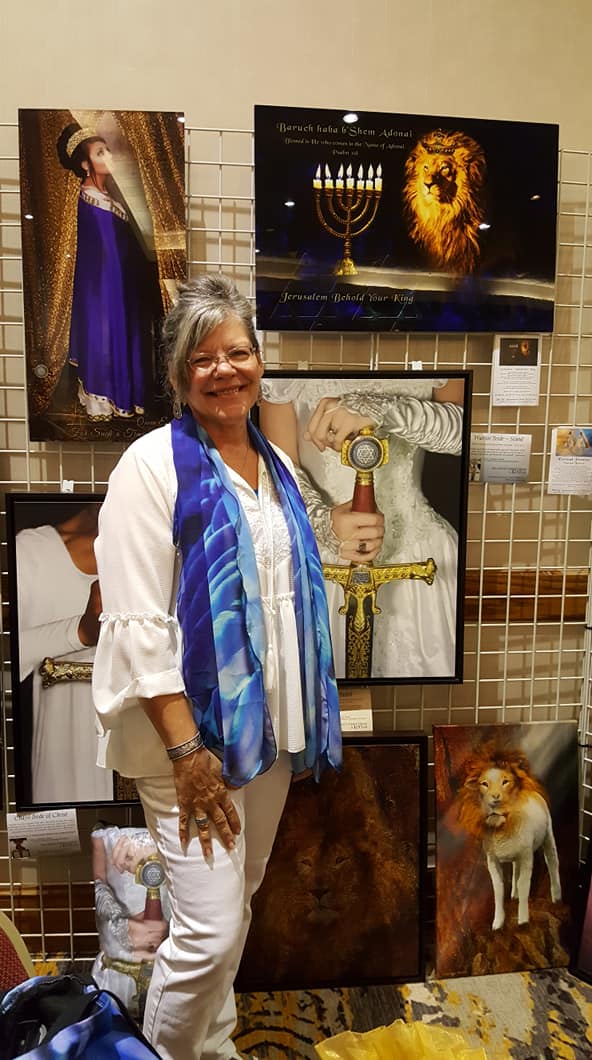 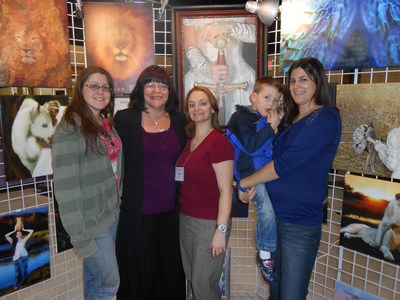 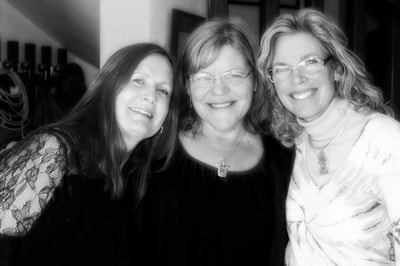 With Rachel Boskey and Marcelyn Bracha 2014 In Israel 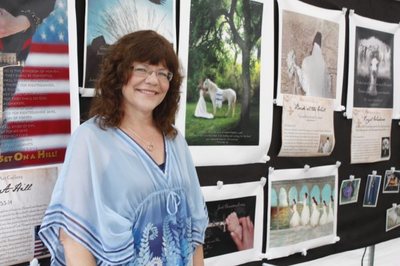 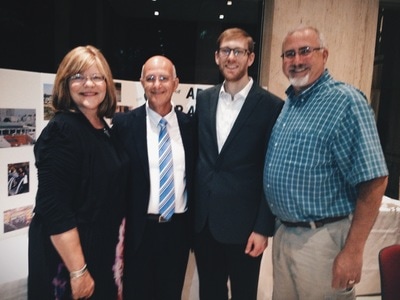 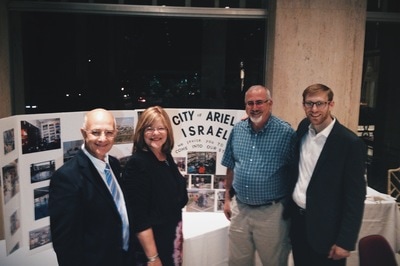 With Mayor of the City of Ariel, Israel and Avi Zimmerman 2015. 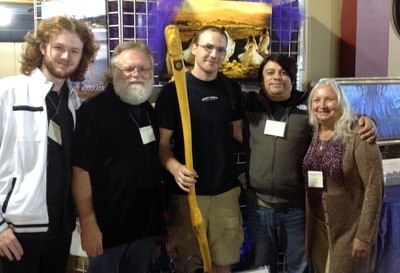 My son the artisan with the hand carved staff he made, surrounded by "the artisans," 2014. 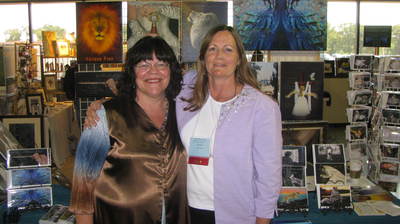 With Rachel Boskey at Glory of Zion 2013. 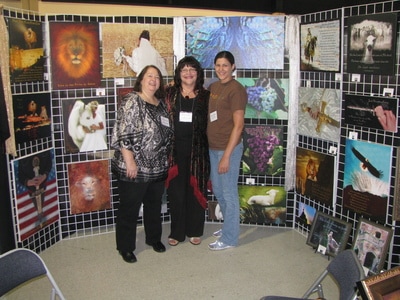 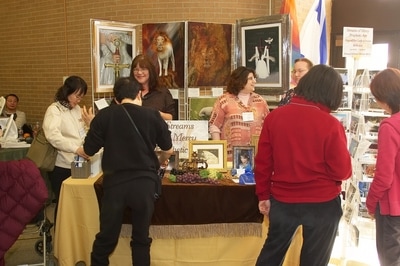 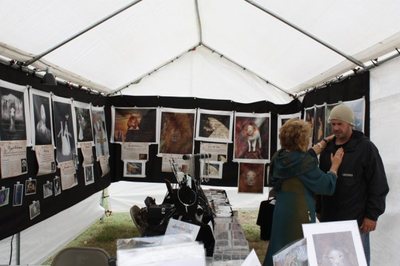 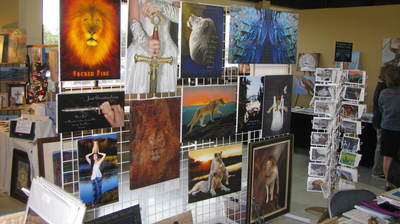 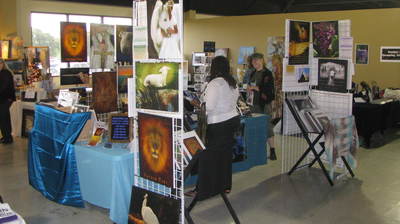 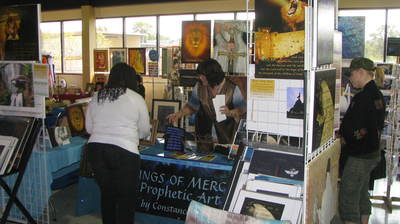 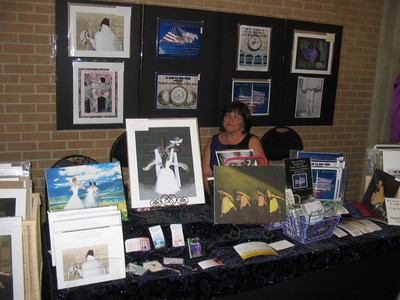 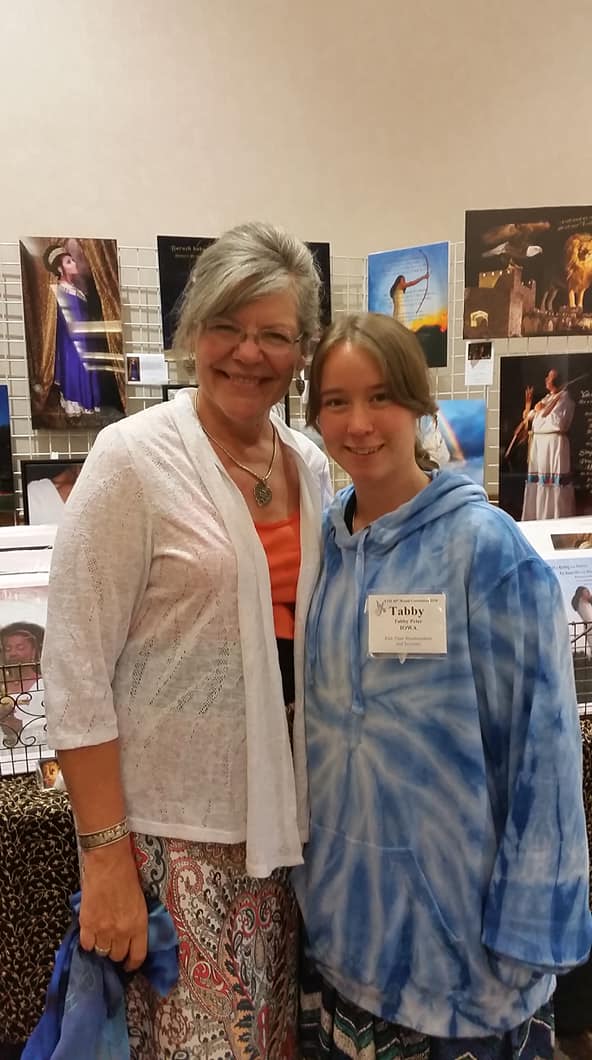 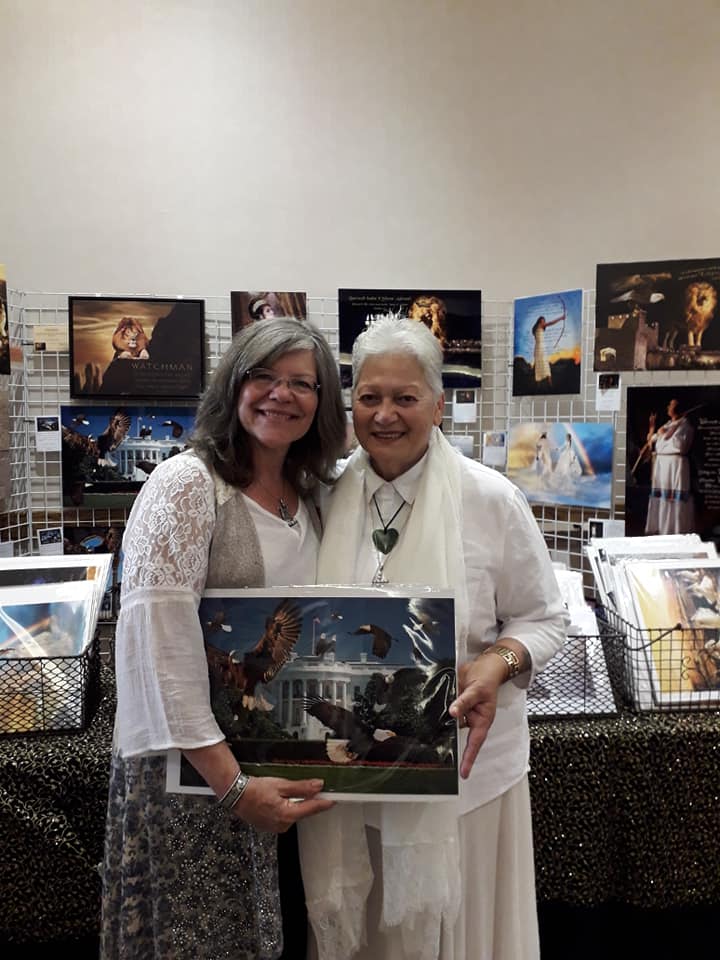