Daughter of The King 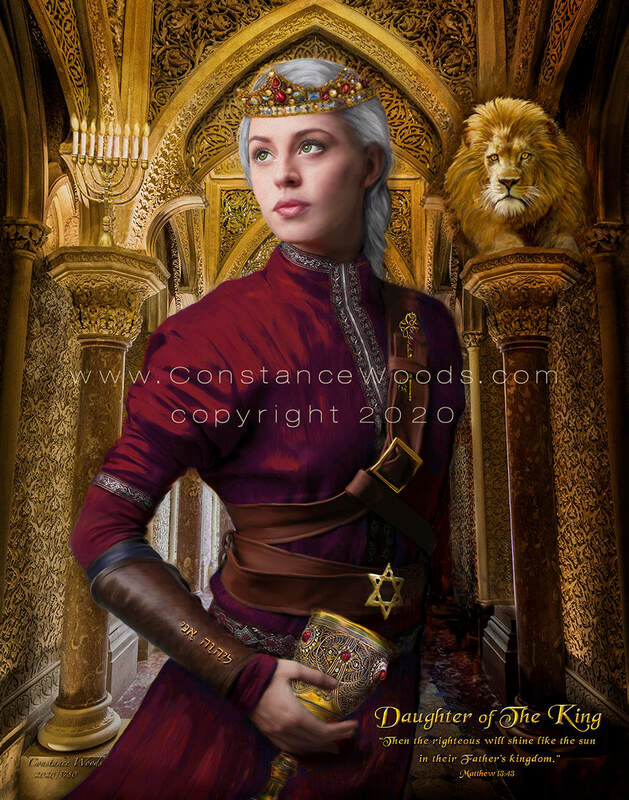 DAUGHTER OF THE KING
“Then the righteous will shine like the sun in their Father’s kingdom.”  Mt. 13:43

We are called to reign, to operate at high level governmental functions, binding and loosing, opening and closing spiritual doors, releasing heaven’s decrees to earth.  As a prophetic artist, my role is to deliver the visual message that God reveals to me through visions, nothing more and nothing less.  SILVER and GOLDrepresent what I have seen in that “God’s present-day remnant” has passed much testing of HIS REFINERS FIRE spoken of in Malachi 3.  God purifies those who embrace the call, HE purges our heart of all unrighteousness, through the process of His refining fire and we become pure-hearted, humble, reflecting His character, His Holiness.  SILVER HAIR:  She is young with wisdom beyond her years, and she also represents the older woman with maturity.  Yahweh’s remnant army bride is not complete without both young and the old working together.
She has embraced her call to battle, both spiritually and in the natural.  As a trained archer she wears a leather
arm-guard (a bracer), where her identity statement: "I am the Lord's," is engraved with gold Hebrew writing.  This fulfills Isaiah's prophecy in 44:5, "Another will write on his hand, 'I am the Lord's.’"
“The Lion of The Tribe of Judah” (Rev. 5:5) faithfully remains by her side, is Jesus Christ Himself.
The burning Menorah represents her infilling with His Light.  “Then Jesus spoke to them again, saying, “I am the light of the world. He who follows Me shall not walk in darkness, but, have the light of life.” John 8:12
She prays and worships with authority, represented by “The key of the house of David I will lay on his shoulder; So he shall open, and no one shall shut; And he shall shut, and no one shall open.”  Isaiah 22:22
She is holding The Cup representing The New Covenant.  Jesus said in 1 Corin. 11:25: “This cup is the new covenant in My blood. This do, as often as you drink it, in remembrance of Me.”
Star Of David represents worshipping Jesus (Yeshua) King of the Jews.  “Now after Jesus was born in Bethlehem of Judea in the days of Herod the king, behold, wise men from the East came to Jerusalem, saying, “Where is He who has been born King of the Jews? For we have seen His star in the East and have come to worship Him.”

With rich symbolism Daughter of The King, released in Dec. 2020/5780, prophetically tells a story from Romans 8:14-18 NASB:  "For all who are being led by the Spirit of God, these are sons and daughters of God. For you have not received a spirit of slavery leading to fear again, but you have received a spirit of adoption as sons and daughters by which we cry out, “Abba! Father!”  The Spirit Himself testifies with our spirit that we are children of God, and if children, heirs also, heirs of God and fellow heirs with Christ, if indeed we suffer with Him so that we may also be glorified with Him.  For I consider that the sufferings of this present time are not worthy to be compared with the glory that is to be revealed to us.”

Scroll down to see this image availablity with several options for Garment Color, Hair Color, and Eye Color.  Also available without Writing on the Artwork.     And available as a stretched canvas with or without a frame.
​Email for info - ConstanceWoods1212@yahoo.com

NOTES:  * Fine Art Prints will be shipped in a flat cardboard box or tube.  * Canvas Giclee will be shipped rolled up in a tube.   ** Canvas are NOT framed.  Please email or call to order a Gallery Wrapped Canvas.  * OUR PRICE INCLUDES SHIPPING AND HANDLING INSIDE USA.  * FOR INTERNATIONAL  PURCHASES CONTACT US FIRST BEFORE ANY TRANSACTION.

​To order Daughter of The King with No Writing - or as a Stretched Canvas - or a Framed Artwork - Email ConstanceWoods1212@yahoo.com